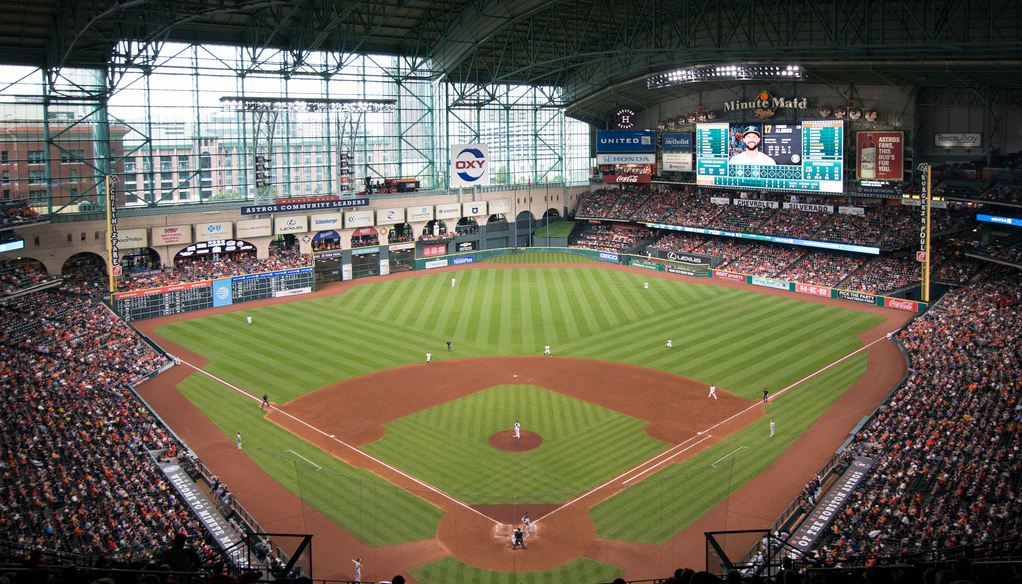 Minute Maid Park, previously known as The Ballpark at Union Station. Some of you may even know it as Enron Field and Astros Field. It is located in Downtown Houston, Texas and was opened in 2000 to house the Houston Astros of MLB.

The ballpark is Houston’s first retractable-roofed ballpark and features a natural grass playing field. Theis stadium was built as a replacement of the Astrodome, which was built in 1965. Fans are most likely to find the name familiar as it is named after the beverage brand Minute Maid (a subsidiary of Coca-Cola Co.). The naming rights were sold in 2002 for $100 million over 30 years to Coca-Cola.

Initially, the ballpark was named “Enron Field” on April 7, 2000. The naming rights were sold to the Houston energy and financial trading company in a 30-year, $100 million deal. However, when the energy corporation went bankrupt in 2001 due to a financial scandal, Astros management faced a public relations problem. On February 5, 2002, Astros ownership filed a motion with the court overseeing the company’s bankruptcy to force Enron to make an immediate decision on the matter, after refusing to prematurely end their contract with Astros. By February 27, the two entities agreed to end the naming rights. Astros paid $2.1 million to Enron to end their contract. As soon as the settlement was paid, the ballpark became officially known as “Astros Field”.

During its days as Enron Field, it was also dubbed “Ten-Run” or “Home Run” Field. The nicknames were due to its cozy left-field dimensions. The stadium is sometimes known as “The Juice Box” as a homage to its current name sponsor.

The groundbreaking ceremony for The Ballpark at Union Station was on October 30, 1997. There were a lot of discussions and disagreements that happened prior to the building of the stadium. It was initially planned out of Downton Houston. However, in September 1996, they finally changed it to Downtown Houston, next to Union Station, where it is currently located. Union Station’s main concourse was preserved and renovated as the ballpark’s main lobby.

Early stadium sketches from Kansas City-based Populous (then HOK Sport) titled “The Ballpark at Union Station” were released to the public on October 11, 1996. Astros President, Tal Smith was vocal and open about his thoughts for the stadium. Some of his feedbacks included the location of the flagpole in center field and a traditional dirt path from the pitcher’s mound to home plate. While the dirt path was not implemented, the flagpole idea became known as “Tal’s Hill”. It remained a signature feature of the ballpark until 2016.

In June 2015, the Astros announced that Tal’s Hill would be removed in a major renovation project during the 2015-2016 offseason. It was to be replaced with additional seating, concessions, and escalators for fans. This renovation would result in center field dimensions of 436 feet (then the longest in MLB) reduced to 409 feet. In addition, seating sections 256, 257, and 258 in the outfield mezzanine would also be removed. Despite some postponement, the renovation was completed during the 2016-2017 offseason.

After multiple alterations, by 2016, Minute Maid Park has a seating capacity of 41,168, which includes 5,197 club seats and 63 luxury suites. The stadium has also hosted other non-baseball events such as soccer, boxing, cricket, and concerts. Megastars like Madonna, Taylor Swift, Paul McCartney, Beyonce, and Jay Z have performed in Minute Maid Park.

Some of the major events that took place in Minute Maid Park since its opening is as below:

For more information on the Minute Maid Park, please see the specific pages below.